Koide and the Compton Wavelength

The Koide formula has been compared to Descartes theory of circles: One can see that the two relationships bear a resemblance. Jerzy Kocik, in his paper called “The Koide Lepton Mass Formula and Geometry of Circles” uses this correspondence to determine that the Koide formula looks like a generalization of Descartes Circle equation – with a characteristic angle of about 48 degrees.

If one uses this formula, then the radius of the electron is actually the biggest, and tau smallest, (with a further particle having no or almost no mass…-  ν  ?). 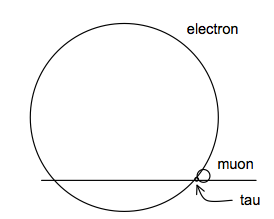 So are there any physical models that work well with the lightweight electron being large?

The Koide Lepton Mass Formula and Geometry of Circles

Alexander Burinskii  – posits these same radii for the electron, muon and tau, using the Kerr Neumann formula r = J/m = hbar/2m. Note that I would use only the Kerr formula (same answer for large a)

Implies huge electron, but as Burinski points out, this might not be the size we see when accelerated, etc.

So if the Koide formula is real, then it describes some relationship between the areas (using the geometry paper) where they overlap at some 48 degree angle (look at diagrams).

The naked kerr solution describes a wormhole like situation, so we could get the mass oscillation that I am looking for.

Also – is a kerr solution with a so high really a naked singularity. The ring would look like a straight line (use cylindrical coordinates) – like a line of sharwshild solutions moving in space – would this make an horizon again? (I am thinking of a tubular horizon…)

2 responses to Koide and the Compton Wavelength